This continues the blog of an Easter 1986 trip to Australia, based on scant notebook entries and vague memories and illustrated with digitised images slides taken at the time, some of which have since degraded.

It was raining when I arrived in Cairns on 26 March and checked into a youth hostel.  I headed out along the Esplanade hoping the weather would improve but it did not.  The tide was a long way out and waders rather distant, although they did include 30 Sharp-tailed Sandpipers and 10 Grey-tailed Tattlers.  In the Botanical Gardens, also in easy walking distance, I saw a rather bedraggled Brush Turkey, 2 Bush Stone Curlew, a male Leaden Flycatcher and 3 Varied Honeyeaters.  Towards dusk 2500+ Shining Starlings came in to roost, the vast majority appearing to be juveniles.  The 27 March was another wet day.  I spent it walking along the Esplanade and at the Botanical Gardens but did not time it very well as the tide was either right in (no birds) or a long way out (birds very distant).  At the Botanical Gardens I found a nice trail going fairly steeply up a hill and overlooking Cairns.  I saw the same 2 Bush Stone Curlew, Malay Bronze Cuckoo, Barred Cuckoo-Shrike, Black Butcherbird, Fairy Warbler, Pale Yellow Robin and 3 Spectacled Monarchs.  That evening I met up with Paul Noakes who had flown in from Brisbane.

On 28 March we walked to the ‘Cairns Hill’ trail at the Botanical Gardens where we saw Yellow-legged Scrubfowl, White-bellied Sea-Eagles. Oriental Cuckoo  and 2 White-tailed Paradise Kingfishers (one was superb with a full tail).  A Little Kingfisher flew by at the Centenial Lakes but frustratingly did not land.  We walked back into Cairns and made enquiries about hiring a car.  We wanted the cheapest available which was a Honda City.  We were warned that it was very small but it wasn’t a model we could picture and they did not have one that we could see as the one we hired would have to be brought up from their garage in another part of town.  We did a quick tour of a couple of streets and soon found one to see for ourselves.  It wasn’t tiny and we reckoned that if necessary we could sleep in it at a pinch.  We went back to complete the paperwork for a week’s hire.  The bonnet dropped off at such an angle that we could not see where the front of the car was. Which was a bit disconcerting, but other than that it was excellent.  We briefly visited Yorkies Knob (Crested and Lesser Crested Terns), Mareeba (23 Little Whimbrel) and Big Mitchell Creek (Crested Baza, Scaly-breasted Lorikeet, White-browed Robin and another White-tailed Paradise Kingfisher).  We saw 50+ Sulphur-crested Cockatoos at roost and once it was dark Paul used his spotlight to great effect as I drove to and up Mount.  First he picked up a roosting White-bellied Cuckoo Shrike (no big deal as they were quite common) followed by an Owlet-Nightjar between Mount Molloy and Julatten and a Papuan Frogmouth as we started driving up Mt Lewis.  Superb.


We camped near the top of the road up Mount Lewis and birded there the next day (29 March) until late afternoon flushing a King Quail and getting good views of Northern Logrunners (7), Grey-headed Robins, Yellow-breasted Boatbills, Eastern Whipbird, Tooth-billed and Spotted Catbirds, Rufous Songlark, Mountain Thornbill (tiny), Bridled Honeyeater, Bower’s Shrike-Thrush, Satin and a Golden Bowerbird and 12 Victoria’s Riflebirds.  An excellent selection of species although only seeing a female plumaged bowerbird and riflebirds was disappointing.  We stopped in dry scrub near Mt Molloy in the early evening seeing Varied Sitellas with 20 White-throated Needletails overhead an obvious highlight.

It rained virtually all day on 30 March making birding difficult.  A roosting Barking Owl at Big Mitchell Creek was a good find by Paul with Graceful Honeyeater, Little Eagle and another White-browed Robin there and Blue-winged Kookaburra, Grey-crowned Babblers, Black-throated Finch and Chestnut-breasted Mannikin at Carr Creek.  Tinaroo Dam was disappointing although Australian Wood and White-eyed Ducks, Cotton Pygmy Goose and Spotted Harrier didn’t seem to mind the weather.  Back at Mareeba there were now 35 Little Whimbrel.  We camped near Hasties Swamp were over 100 Sulphur-crested Cockatoos were roosting.

The 31 March was a drier day but still with some rain.  We spent much of the morning at Hasties Swamp seeing Diving and Plumed Whistling Duck, Banded Rail, Lotusbird, Tree and Fairy Martins and Clamorous Reed Warbler.  Nardellos Lagoon was quiet (Black Swans best!) while a return to Carr Creek produced Little Friarbird, a flock of 15 Apostlebirds (the only time I saw either species on the trip) and, for me, excellent views of a roosting Tawny Frogmouth.  It was superb and one of my trip highlights.  We spent the last hour of so at Big Mitchell Creek where I saw my only Weebills, an appropriately named species. 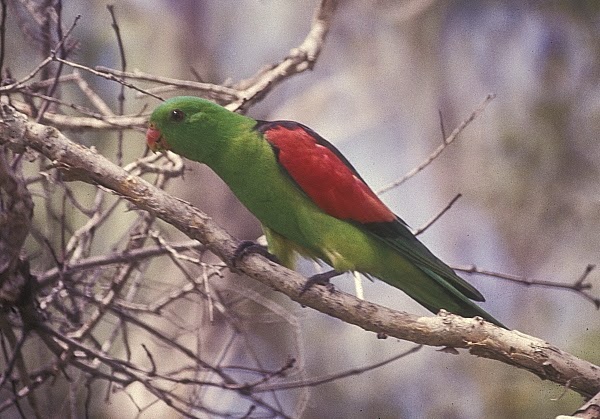 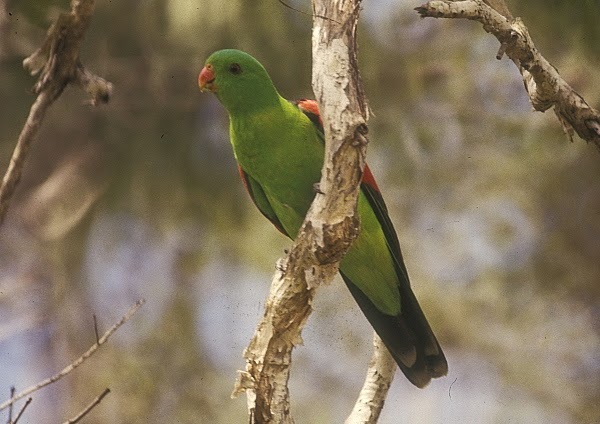 On 1 April we birded briefly at Big Michell Creek, Nardellos Lagoon and Hasties Swamp before spending most of the day at the Crater.  Hasties added 4 smart Pink-eared Duck and a Japanese Snipe but it was otherwise fairly quiet until the Crater.  This was brilliant with Yellow-legged Scrubfowl, 15 Bush Turkeys, Emerald and Wompoo Fruit-Doves, 20 Grey-headed Robins, Northern Logrunner, Eastern Whipbird, my only Fernwren and Atherton Scrubwren (I was expecting both to be somewhat more abundant), Golden Bowerbird, Tooth-billed and Spotted Catbirds and Victoria’s Riflebird.  Again the Golden Bowerbird was in female plumage but one of the two riflebirds was a superb male.  We camped at the crater well pleased with what we had seen.

The 2 April was another wet day and we had a quick look around the Crater, seeing many of the species seen the previous day, before driving to Mission Beach for the afternoon.