After a night in San Mateo we drove up to Tingo Mine, at 14,000 ft, and spent an uncomfortable morning birding there.  Earthcreepers and Ground-Tyrants were great but having come pretty much straight from sea level it was no surprise that we all felt the effects of altitude, for me that was breathlessness and a severe headache which thankfully stopped as soon as we went back down.  We drove to Ticlio Pass (Abra Anticola) and Lake Junin with the Central Highway being in atrocious condition in places.  We spent the night camping by the lake after a couple of hours eating in a rather rough bar occupied by scary characters that wouldn’t have looked out of place in Clint Eastwood western – all turning around to stare at us gringos as we entered.  The next morning we birded around Lake Junin and then went on to an excellent patch of polylepis woodland at La Quinea.  Here Stripe-headed Antpitta was the star, and my 110th new bird of the trip.
On 6 August we’d moved on past Huanuco to the Carpish Tunnel and the Paty Trail, encountering  the great Ted Parker at the former.  His knowledge of vocalisations was amazing but it was somewhat frustrating to have distant calls of much sought after new birds pointed out coming from down in the valley far below.  I’d been quite happy in my ignorance!  The Carpish area was often shrouded in low cloud while the nearby Paty Trail was both very steep and muddy but both were excellent for birds with Rufous-headed Pigmy –Tyrant, Rufous-breasted Chat-Tyrant, Masked Fruiteater and the stunning Moustached Flower-piercer amongst the highlights.  We reluctantly moved on to Tingo Maria after two days, stopping on the way at the Rio Chinchavito Gorge where we saw an Amazonian Umbrellabird. 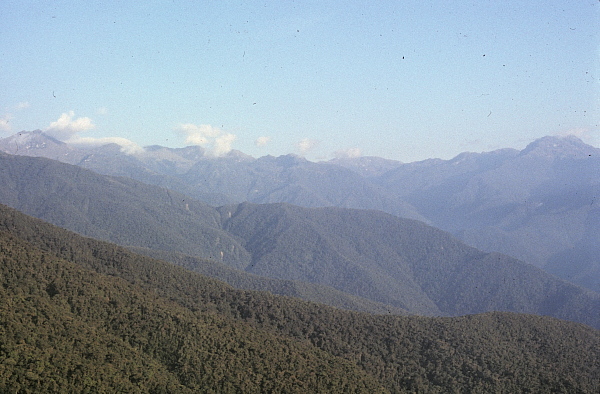 view of distant forested hillsides from near the Carpish Tunnel


Tingo Maria was a true frontier town with the Shining Path Maoists operating in the province giving the feeling of being under siege.  Getting food in town on our first evening we only became aware that we shouldn’t walk down the main street on the same side of the road as the local Police Station when a warning shot was fired.  After that we were very pleased to leave town and camp in Tingo Maria park where we spent the next day.  We were back in the lowlands and it was hot and sweaty but excellent birding with Military Macaw, Band-bellied Owl, Oilbird (50 leaving a cave), Bluish-fronted Jacamar and the superb Pale-legged Hornero most memorable.  Barry had brought a mist net and tried it at Tingo but caught just two species, although both were new for me.  Back in Tingo at dusk Nick turned the wrong way down a poorly signed one-way street and was immediately pulled over by a policeman.  The cop saw Barry, the only drinker amongst us, with a bottle of Whiskey in the back seat and decided to breathalyse Nick.  This involved Nick breathing into the cop’s face, who presumably fail to detect any alcoholic fumes let us continue.
After a meal in Tingo Maria we drove on to La Divisiora where we spent the next day on another muddy trail although it was much less steep than at Paty.  Barry did better with his net catching 8 birds including a Chestnut-breasted Wren although he stopped when it started raining hard. For me a Black-mandibled Toucan was particularly welcome.  After dark we drove on to towards Pucallpa in the Amazon basin although it was not an area we had any information about and we were uncertain that we’d find any decent habitat.
Extensive improvements were being made to the road to Pucallpa which in parts was like a muddy track.  We got stuck but with 4 of us managed to push the car out.  It was only a short lived respite as with Mike driving we hit another very muddy section.  Mike put his foot down to try and get us through it but we went into a big skid and ended up sideways on and very firmly bogged down, probably fortunate not to have rolled over.  Fortunately there was a road camp about a km up the road and we persuaded them to come back with a big truck to tow us out.  Luckily the road improved after that but the journey was still not without incident.  We took what we thought was a wrong turn and after a couple of kilometres decided to turn round.  Barry’s three point turn slammed us back on into an electricity pole and we thought we’d got away with a minor dent in the bumper.  Back at the junction we realised that we’d been going the right way after all and retraced out steps again.  Passing the electricity pole a local woman was trying to shake it, presumably we’d interrupted their power supply.  It seemed prudent to continue driving.  At the next stop though we realised we’d not got away unscathed after all as we had an oil leak.  Each stop now we put a metal pan under the sump and when setting off again poured the oil back into the engine.

At Pucallpa the best habitat that we could access was at Lake Yanacocha but even here it was badly degraded.  Despite some impressive birds (Sunbittern, Rufous-sided Crake, Purus Jacamar, Scarlet-crowned Barbet) we found the area disappointing, typified by the harrowing sight of a Two-toed Sloth clinging to a recently felled tree in a newly cleared area.  It had been worth giving Pucallpa a go, and I was up to 188 new species for the trip, but we did not feel it justified any further time so we started to head back to La Divisiora.

Posted by richard fairbank at 14:58