We said a temporary goodbye to Barry in Lima - he was flying back to.Cuzco and we had an invitation to stay with him there – and got our bus.  It was clearly a good run as 36 hours was about right, although a night and a half on uncomfortable seats was far from ideal.  The scenery as we crossed the spine of the Andes in daylight was spectacular but it was frustrating not being able to look around other than at meal stops, which were invariably in towns.  I did see 6 Torrent Duck, 5 Giant Coot and 50 Grey-breasted Seedsnipe while Spot-winged Pigeon was my 245th new bird on the trip.

Sacsayhuaman ruins, on the edge of Cuzco, were spectacular – how did they get the huge stones to fit together so perfectly –but I was more concerned to miss a Chestnut-breasted Mountain-Finch that Nick saw while we birded some scrub nearby.  I’d not been feeling too well at the time, probably due to lack of sleep, and was lagging behind a bit.  Nice as Green-tailed Trainbearers, Rusty-fronted Canasteros and White-browed Chat-Tyrants were they unfortunately didn’t make up for it.  Getting a taxi back to Barry’s house I was pleased to make use of my basic Spanish ‘Casa blanca, aqui’.  I was even understood! 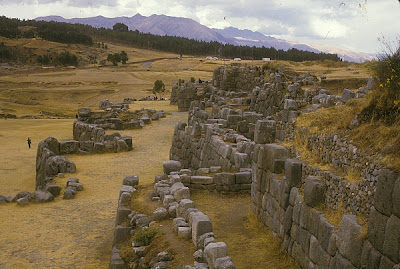 We booked train tickets to Aguas Calientes, the station before Machu Picchu where we hoped to find reasonable accommodation.  Despite the town’s name I don’t remember our establishment having hot water but we didn’t spend a lot of time there and so weren’t too concerned.  After dumping our bags we walked further along the railway track past Machu Picchu station.  It was pleasant birding until it started raining and we saw another 6 Torrent Duck and some spectacular tanagers including Silvery.  We decided to continue and I put on my waterproof, full length and very bright orange.  I got the usual remarks about how well camouflaged I was but had the last laugh when a loud squawking alerted us to a male Andean Cock-of-the-Rock flying across the river towards us.  It landed 10-15 yards way and was really freaking out at us, or more likely my coat which was a similar colour.  We got amazing views before it realised I was not a rival and it went back to where it came from.  I was too stunned to get my camera out of my bag, where I’d put it to keep it dry.  I tell myself I would only have disturbed the bird if I’d tried.  We’d seen a female on the Central Highway but this was our first male.  An unforgettable experience and Peru’s national bird.
The next morning we set off early to walk back to Machu Picchu station and climb up to the ruins.  By doing so we arrived before the first tourist bus or train from Cuzco and pretty much had the place to ourselves for the first hour or so.  Some places one dreams of visiting but then finds them to be a bit disappointing (Niagara Falls comes to mind) but this was most certainly not true of Machu Picchu.  We walked around with jaws agape at the splendour of the setting, trying to imagine the effort required to build it.  As the ruins became busier I climbed up Huayna Picchu (Young Peak to Machu Picchu’s Old Peak) which gave superb views looking down on the ruins.  A bag-piper added to the atmosphere even if it was being played by an American tourist (of Scottish descent).  Only from here was the full awfulness of the posh Tourist Hotel evident. 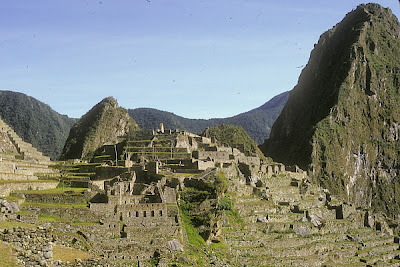 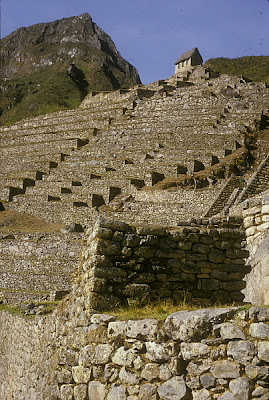 Posted by richard fairbank at 13:59