Mike, Nick and I were in Ollantaytambo’s main square soon after dawn and after about an hour hitched a lift on the top of a soft drinks lorry bound for Quillabamba.  While we’d been waiting the village idiot threw a spear at a pig which was unfortunate enough to wander into range and soon legged it off squealing with a flesh wound  I doubt the pig’s owner would have been any more impressed than we were.  The lorry struggled up the mountain road to Abra Malaga (4315m) where we got off a couple of hours later.  Our attempts at buying some bottles of drink from the driver were unsuccessful, and had him climbing up onto the back to check we’d not helped ourselves to his cargo, tempting as it had been sitting on full crates of it.  We birded the area around the pass and crossed a nearby ridge to climb down into some brilliant scattered stands of polylepis where I saw Andean Tapaculo, 6 Stripe-headed Antpittas, Tawny Tit-Spinetails, a superb Stout-billed Cinclodes and 3 Giant Conebills.  We then set off fairly steadily down the road to Canchillo (3260m), hoping we might get a lift but there was virtually no traffic and we ended up walking the whole way (18 km) arrived just as it was getting dark.  There was a small café there which had been a two roomed hut in a previous life and we were fed, fortunately not Guinea Pig of which several were running around, and put up for the night. 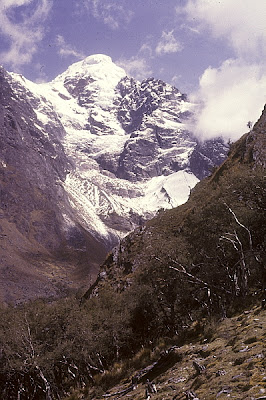 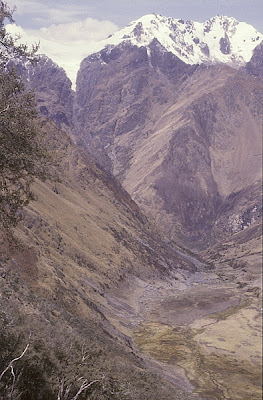 The next morning we had a look around Canchillo which was on the forest edge.  We then continued birding down the road towards San Luis (2740m), 20 kms away.  We were in  superb forest all the way and were happy to spend most of the rest of the day walking it.  Birds seen included Shining Sunbeam (they were as good as the name suggests), Puna Thistletail, Rufous Antpitta (brilliant) and Crowned Chat-Tyrant (something I’d very much hoped to see).  San Luis was a truck stop restaurant which served adequate food and after some persuading allowed us to sleep on the floor in a shady corner.  Considering we’d seen very little traffic on the road it was surprisingly noisy at night.

We spent all of the 23rd August birding around San Luis.  The area further down the road was mainly cleared and we concentrated on an excellent trail behind the Restaurant (Nick Gardner’s Antpitta trail) and the forest edge back up the road.  On the Antpitta trail, as the light was beginning to go, a fantastic Undulated Antpitta appeared and gave us excellent views.  It was larger than any antpitta I’d seen before and certainly one of the birds of the trip for me.  Earlier we’d seen Rufous-headed Pigmy-Tyrant and Slaty-backed Nightingale-Thrush and frustratingly I saw an unidentified male fruiteater in flight.  Another night on the restaurant floor celebrating what was proving to be the most enjoyable part of the trip (no police encounters for a few days now!).

The plan for 24th was to start walking back up the road and after a couple of hours try our luck at hitching back to Ollantaytambo and Cuzco.  This worked pretty much to plan with a pair of Grey-breasted Mountain-Toucans seen just above San Luis a real bonus (and my only new bird of the day, no. 288).  I also saw 2 more Rufous Antpittas, one in flight an done really well in vegetation by the road.  A pickup came by and we flagged it down and were kindly given a lift back to Cuzco where we arrived after dark.  The journey took ages and at times was quite uncomfortable – freezing over the pass and at times quite wet –although the scenery was spectacular when not hanging on for dear life!  Early on we dived into our rucksacks to put on all available clothes but even so I ended up getting a chill and felt pretty rough for a few days after.  Back in Cuzco we gain took advantage of Barry and Margot’s hospitality at Casa Blanca.

We had a day trip to Huarcapay Lakes on 25th where Bearded Mountaineer could be found.  We were not disappointed and had excellent views of two of this very impressive hummer.  Slender-billed Miner and Yellow-winged Blackbird were also new there but I wasn’t feeling my best and don’t remember much else about the day, or a final day around Cuzco which produced little, although White-browed Chat-Tyrants were always nice to see.  We said goodbye to Barry and Margot and caught the overnight bus to Puno.  We’d been rather put off the overnight train as it had a reputation for pickpockets greatly reducing the odds of making the journey with one’s luggage intact.  What we didn’t know was that our bus driver didn’t know the difference between a road and a river as just before dawn the following morning, and 20 kms short of Puno, we went the wrong way at a ford and got well and truly stuck.  By the time we awoke and realised what was going on (loud talking, people on the roof, watery view from my window) all the other passengers had gone.

Posted by richard fairbank at 13:31