This blog is the first of five recounting a very successful trip to Northern Ecuador with Nick Preston, Mike Catsis and Gabo Bucheli  [gabucheli@gmail.com] who brilliantly guided us around for almost three weeks in February 2018. It is illustrated with photos taken with a Canon Powershot SX60 bridge camera, many in the forest taken at maximum ISO and slow shutter speed.

Introduction. Nick and I were keen to get away early in 2018 and in autumn 2017 considered a few possibilities which we reduced to Ecuador or Japan. The continued performance of the Rufous-crowned Pittasona at Mashpi Shungo had been on our minds for some time and gave the former the edge and with Dave Cooper being there in November we eagerly awaited his return. He did brilliantly well, not just with the pittasoma but elsewhere and this firmed up our choice. With his very helpful information we decided to more or less follow his circuit - after the disappointing trip to Bolivia in November doing half as well as DC would be a real shot in the arm! I contacted Gabo who had very ably guided Marc Brew, Jon Hornbuckle, Rod Martins and myself in January 2015 (see relevant posts oj this blog). Gabo had a prior commitment for the early part of the period we wanted to go but fortunately for us it failed to firm up, freeing him for all of our trip. Being guided had many benefits but made the trip more expensive so we looked for one or two others to join us. We had almost given up on this when Mike expressed an interest in the trip and we were able to firm things up. I combined our different target lists (Nick’s was predictably just Rufous-crowned Pittasoma although I knew that would only remain the case until he’d seen it) and presented Gabo with it and a proposed itinerary stressing the need to keep the first part of the trip flexible. This he did admirably.
07 February. Megan dropped me at Shoreham-by-Sea Station and I caught the train to Victoria and it arrived on time. Signal failure near Ealing Broadway added half an hour and an extra change to the tube journey to Heathrow but I had plenty of time. Nick was already there and we checked in knowing Mike was arriving a bit later. He duly did, also having been delayed by the tube. Our Avianca flight left on time and we had a good meal and decent selection of films.

08 February. I only slept fitfully on the flight which landed in Bogota in the dark -it was early morning in South America. We had just over four hours wait for our connection to Quito which was also on time, two Eared Doves the only birds seen from the terminal. It was little over an hour’s flying time to Quito and we arrived 15 minutes early, collected our bags and went to find Gabo. A mix-up with our arrival time caused some delay but he duly arrived and it was great to see him again. We loaded his car and headed off. We briefly checked at some pools by the airport for duck but they held little and then drove to Calacali to look for White-tailed Shrike-Tyrant unsuccessfully in the dry scrub there. Black-tailed Trainbearer, Sparkling Violetear and Golden-bellied Grosbeak providing some compensation. A very recent landslide had closed the main road to Mindo, which was the way we were heading, but Gabo phoned a friend and was told of a way to avoid it. We had a 15 minute stop at Alamdi to admire the hummingbirds on the feeders – nine species including Purple-throated Woodstar, White-booted Rackettail, White-necked Jacobin and Fawn-breasted Brilliant. We continued around the landslide encountering a 25 minute holdup in Nanegalito before clearing it. We drove to Mashpi, the last part on dirt roads in the rain, arriving at Chontaloma soon after dark. Arturo was keeping a lookout for us and came down to unlock the gate. We then drove halfway to his house before the short steep climb up steps to it. He and his wife Paula had a very comfortable home and provided really excellent meals.
09 February. Breakfast was at 06:00 and we left at 06:40 for the short drive to Mashpi Shungo. We were meeting Danilo at 07:00 and he appeared soon after with a jar of crickets. His news wasn’t encouraging as he’d not seen or heard the pittasoma the previous day. There were ants in the area which made the pittasoma harder to find as it tended to follow them. It was an anxious climb up to the ridge where we arrived at 07:35. Danilo pointed out its favoured location and how nice it must have appeared there. Nothing appeared or responded to playback and Danilo told us to wait while he checked further along the ridge. He returned after a very tense 20 minutes or so saying he had heard a Bicoloured Antbird far down the valley suggesting an antswarm which the pittasoma would likely be attending. We followed him along the ridge and down the other side and were again told to wait. We heard nothing and again 20 or so minutes later Danilo returned saying he had heard the pittasoma some distance away. We followed again, crossing a stream in the bottom of the valley on a mossy log. We found some ants and a Bicoloured Antbird but nothing else. Danilo wandered off again but by now I was beginning to lose hope. He returned after an obligatory 20 minutes to say he’d heard the pittasoma fairly close which was encouraging but added to the tension. We followed to the top of the ridge, a short distance along it and then back down some way to the ants. Danilo played some calls but no reply although something quite large flew in. I crouched down and saw the pittasoma just above the ground less than 10m away. Amazing. It remained with us for 20 minutes during which time it took several grasshoppers, called quietly and I took loads of pics. We reluctantly left when it dropped out of sight but it would be hard to imagine better or more evocative views of a really stunning bird. Brilliant. Our early success opened up more opportunities in the NW although we were not finished with Mashpi Shungo. Gabo played Lanceolated Monklet on the walk back down to the farm and halfway there one responded. We backtracked a short way and spotted it quite high in a tree above us. Not the best view but a long wanted species for me. The only disappointment was not finding a Black and White Owl Danilo had sometimes seen roosting in bamboos, sadly it was a recurring theme with this species! We were back at the car at 12:30 and decided to drive up to Mashpi Amagusa stopping for Russet Antshrike, a distant male Black-tipped Cotinga (well spotted Mike) and Yellow-collared Chlorophonia on the way. There at the feeders and during a 1-2 km walk down the road we saw Velvet-purple Coronet, Empress Brilliant, Purple-bibbed Whitetip, Broad-billed Motmot, Pacific Tuftedcheek, Orange-breasted Fruiteater (a much wanted new bird for me) and Moss-backed and Black-chinned Mountain Tanagers. We birded the area to 17:00 then headed back to Chontaloma just as it started to rain. Until then it had been perfect birding conditions, cloudy but dry. It was a long drive back to Chontaloma where we had another excellent meal. The rain continued all night putting paid to owling aspirations. All in all an absolutely brilliant start to our trip, main target seen really well and plenty of good back-up species. We'd also met an American birder/photographer at the feeders who had seen a pair of Peruvian Antpittas carrying nesting material at San Isidro a few days earlier. They were a little further along the trail than Dave Cooper had found them in November. This was very encouraging but was all we could do not to drive there immediately. As it was we'd be there in six days ... 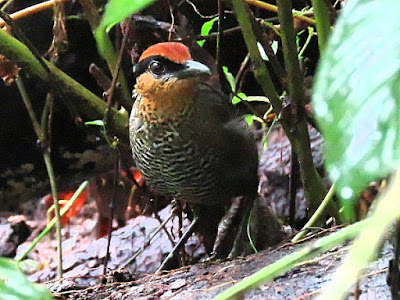 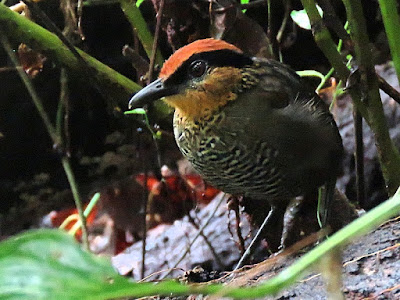 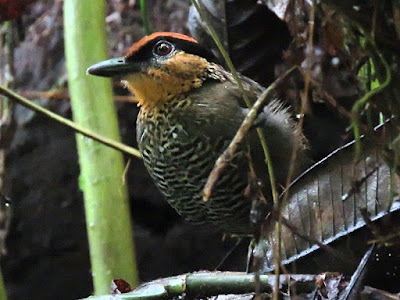 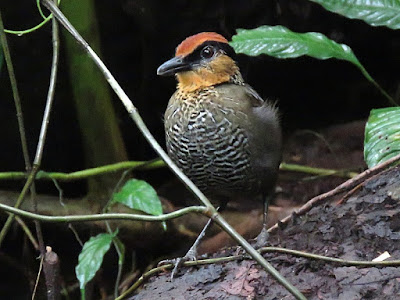 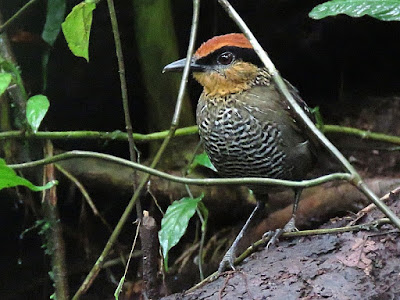 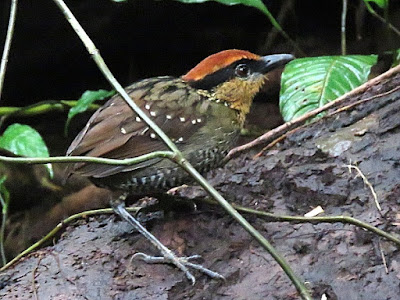 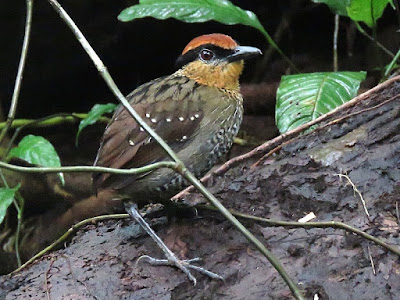 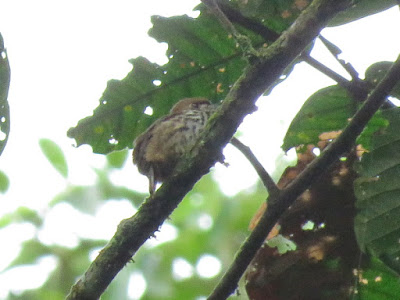 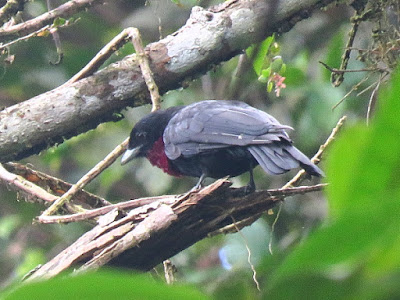 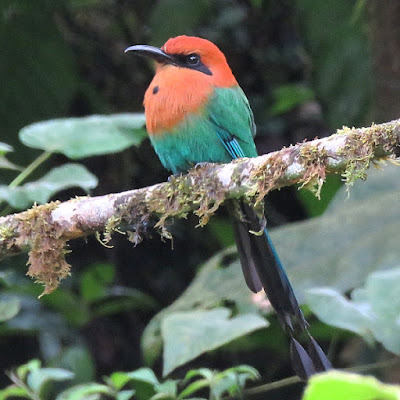 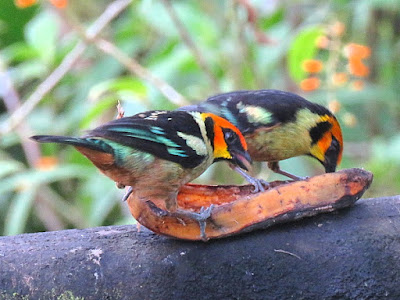 10 February. We had breakfast at 06:00 and slowly drove back to Mashpi Amagusa with several stops for flocks and to walk sections of the road. The clouds were much lower with poor visibility and light rain at times. We saw similar birds with notable additions being Barred Puffbird on the road, White-throated Quail Dove, Crimson-rumped Toucanet and Indigo Flowerpiercer at the feeders and a superb Indigo-crowned Quail Dove on a small muddy trail where Banded Ground-Cuckoo had recently been seen a couple of times by the landowner. We returned to Chontaloma for another great meal then walked a km of so along the well preserved trail to Mashpi Shungo with Arturo looking for Black and White Owl. Sadly not a sniff and by now we were all feeling pretty wrecked and happy to walk back. 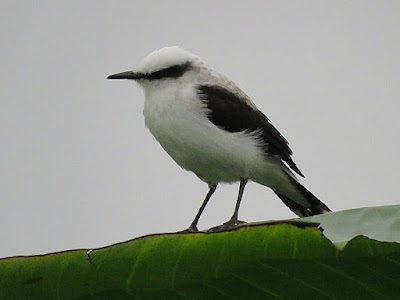 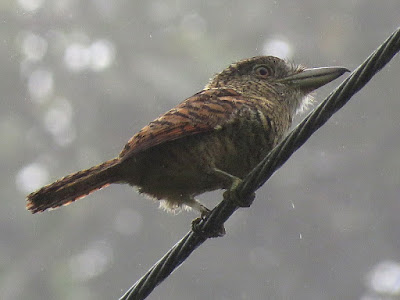 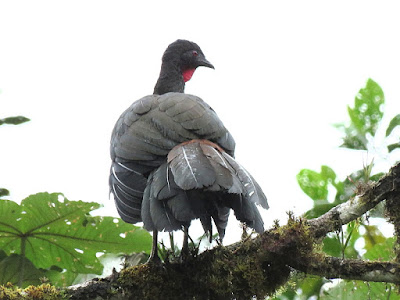 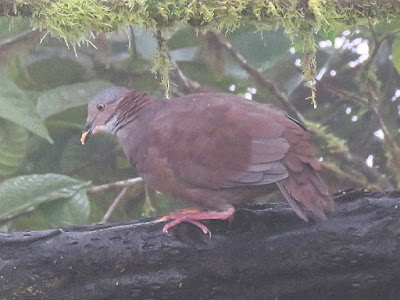 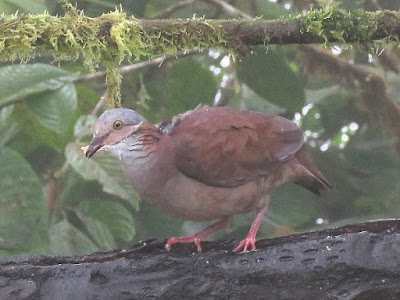 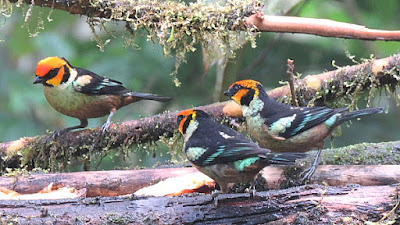 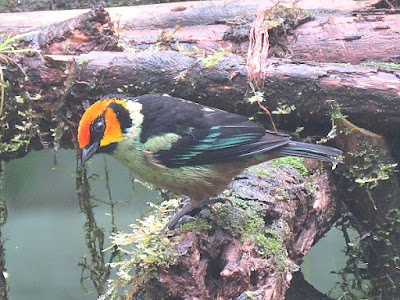 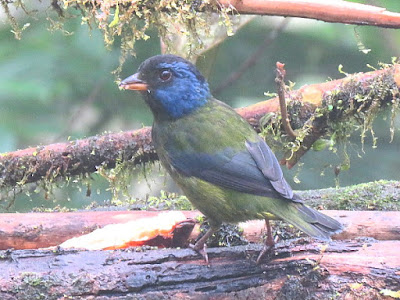 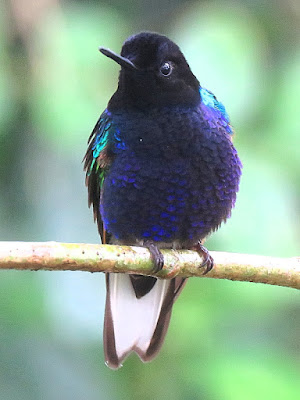 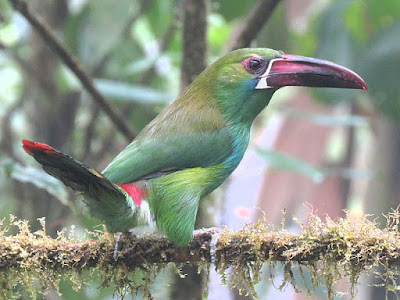 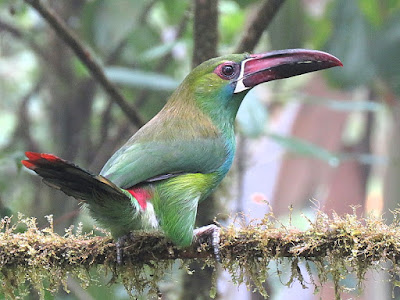 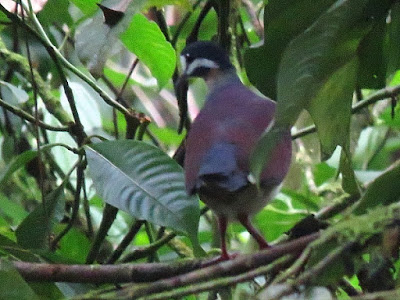 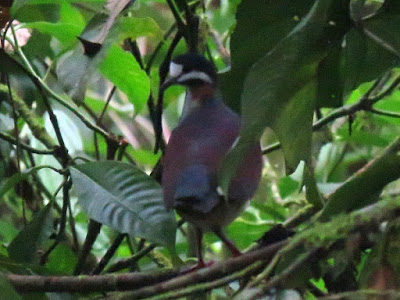 11 February. Breakfast at 05:30 and we departed at dawn to drive to Rio Silanche. Chontaloma had been an excellent place to stay and Arturo and Paula perfect hosts. It set a very high standard which wasn’t quite matched elsewhere on the trip. We arrived at Rio Silanche in heavy rain to find three other birding groups present and the famed canopy tower full. We walked the circular trail in improving weather and Gabo found a Scarlet-breasted Dacnis high in the canopy. None of us had taken scopes due to the rain and it was not great through 8x binoculars although at least the named feature showed well. We came out on the approach road and returned to the canopy tower for lunch which we had mostly much to ourselves although few birds were evident from it. We walked the circular trail a second time and again Gabo's sharp eyes pulled out a goody. This time a Blue-whiskered Tanager, again in the canopy but with whiskers visible through his telescope. Two good Choc endemics that I’d missed on my previous visit. We left Rio Silanche mid-afternoon and drove to Paz de Aves where we were staying the night. We arrived late afternoon for an enjoyable session at the feeders and after a good diner Angel took us down the road a short distance to look for Colombian Screech Owl. One came in to his call, perched in full view on an overhead wire but shot off again before I thought to find it in my camera. We continued further down the valley looking for Black and White Owl around his house drawing another blank.
to be continued ...