This blog is the second of five recounting a very successful trip to Northern Ecuador with Nick Preston, Mike Catsis and Gabo Bucheli who brilliantly guided us around for almost three weeks. It is illustrated with photos taken with a Canon Powershot SX60 bridge camera, many in the forest taken at maximum ISO and slow shutter speed. We had started brilliantly at Mashpi Shungo, Mashpi Amagusa and Rio Silanche and had arrived at Paz de Aves late the previous afternoon.

12 February. We were up at 06:00 for a warm drink and then took Angel Paz with us down to the Cock-of-the-Rock lek for 06:30. We arrived in the heavily forested river valley to find Rodrigo and three other groups totalling eleven people there. Gabo had phoned the previous day and was told there would be four other visitors but we’d not taken into consideration that each group would have at least one guide and an extra, larger group had also come. Given Angel and Rodrigo’s skill at finding their birds this was unlikely to be a problem but it did feel rather like a circus. The Cock-of-the Rocks performed well although soon most moved away. Angel went looking for Dark-backed Wood Quail without success but I did see a calling Narino Tapaculo that Mike taped in, my only realistic new bird for the day. We moved on, each group driving back up the road a km or so to the trail up to the ridge where I had seen Giant Antpitta three years before. I had been spoilt then having Angel and his brother Rodrigo to myself on my first day and then with just four of us. They hadn’t seen the Giant Antpitta on their previous three attempts and I could imagine Mile’s nervousness as it was one of his top three targets. We climbed through good forest up onto the ridge in a long crocodile, a couple of more elderly visitors in one of the other groups gamely bringing up the rear. Rodrigo went further along the ridge than we had before and heard one and our pace quickened. When we were all gathered the bird was called in giving excellent views to everyone. It certainly took the pressure off for us, the hardest and most important antpitta at Angel Paz being the first we saw. On the way down Angel heard a covey of wood quail on a side trail and they soon came out for a banana, three adults and two juveniles. A little further down we had better views of the Rufous-breasted Antthrush that briefly crossed the trail on our way up. Back at the vehicles we drove back to the lodge, stopping briefly to try for an unresponsive Yellow-breasted Antpitta by the road. No matter, Angel had an easier one we’d be visiting later. We took the trail from the lodge a short distance into a forest patch and Moustached came in for its breakfast almost immediately. A short time later a pair of Ochre-breasted Antpittas came in too. Three antpittas down, hopefully two to go but first we had breakfast while checking the feeders (Toucan Barbet being the highlight). We drove further up the hill to a ridge where there were some forest patches amongst mainly pasture. First a Chestnut-crowned Antpitta came for worms then a superb Yellow-breasted, my first five antpitta morning! Quite a contrast to my first visit to Ecuador in 1986 when I saw just two in four weeks. We walked along the ridge for a km of so hoping for Crested Quetzal but didn’t see a great deal. We returned for a late lunch and feeder session, packed and left but despite it now raining our Paz de Aves birding was not quite over. We were taken to a copse just off the road below the lodge where we were shown a roosting Common Potoo. What a brilliant day. We drove to Mindo seeing little on the way and Gabo found a nice place to stay at the second attempt (Cabanas Armonia, his preferred option being full but that was the chance we took by keeping this part of the trip flexible). We ate and at 20:00 with the rain having eased off drove back up to the main road to the grounds of a posh hotel. It sometimes had a Black and White Owl feeding around the lights of its car park but we wandered around without success, meeting two Ecuadorian bird guides Gabo knew who were staying there. They’d not seen the owl either. 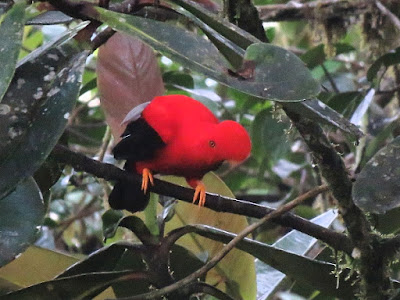 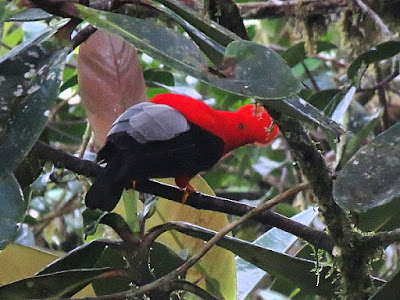 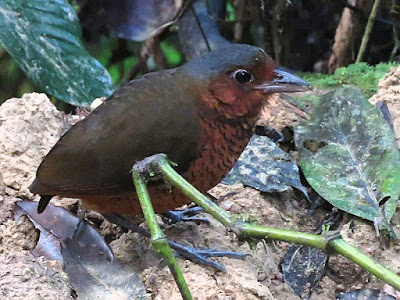 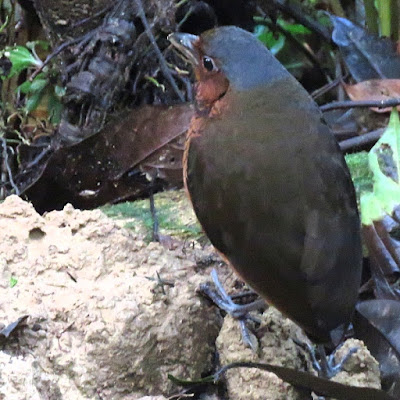 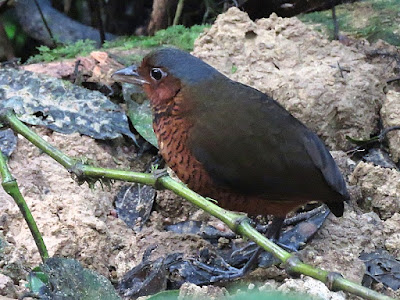 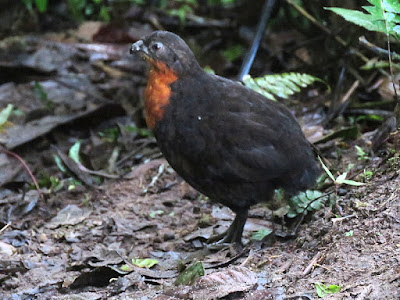 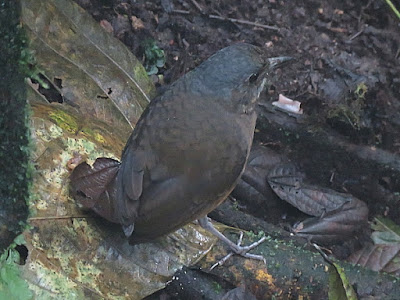 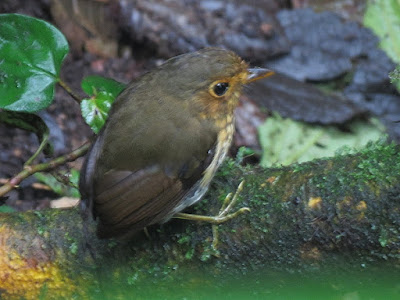 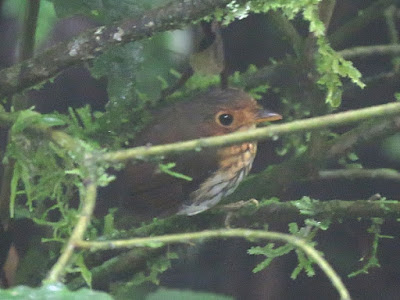 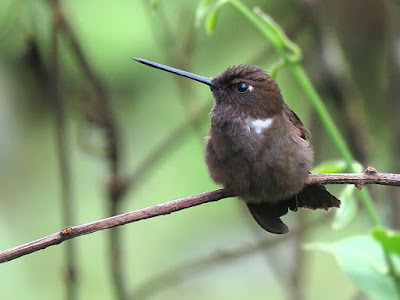 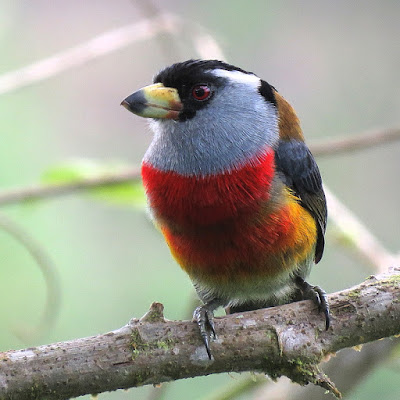 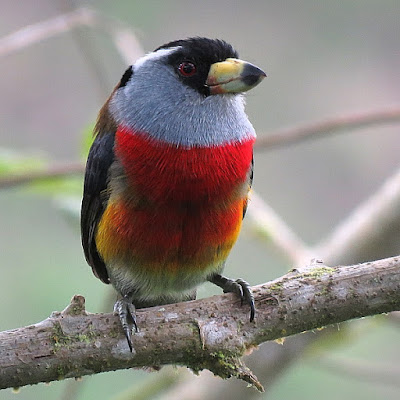 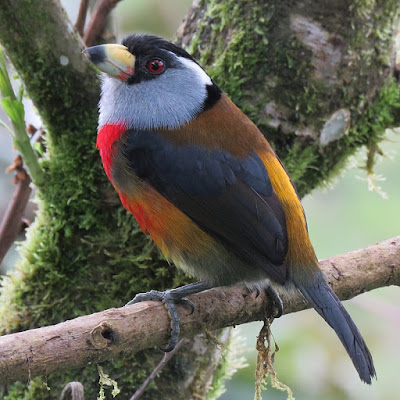 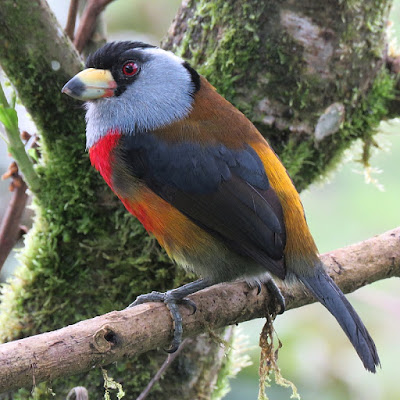 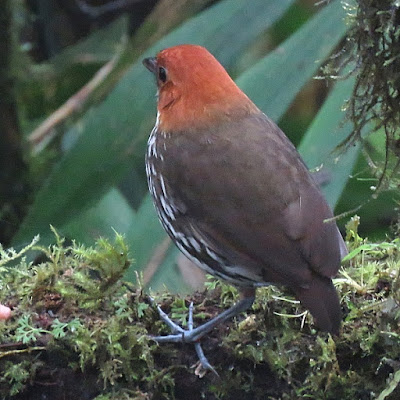 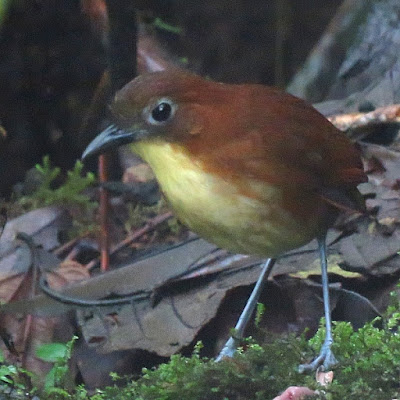 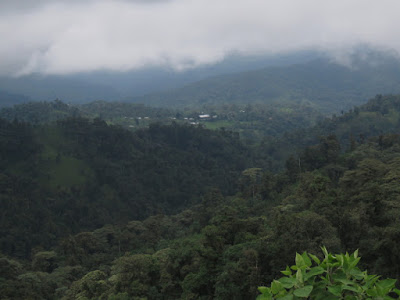 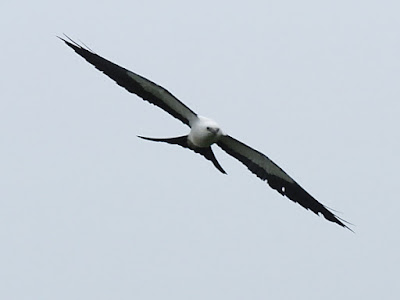 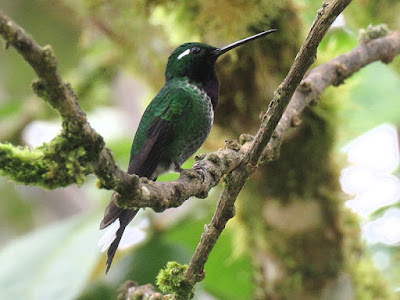 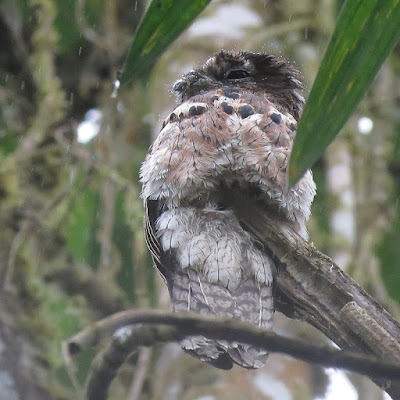 13 February. We were up for 06:00 breakfast and left Mindo at 06:35 to drive towards Bellavista. My main target for the day was Tanager Finch which Dave Cooper had seen by the roadside ‘reservoir’ just short of Bellavista. Gabo considered this the best site and fortunately knew exactly where it was as I would have missed it despite having detailed directions, although from the opposite direction. We arrived at 07:30 in low cloud and drizzle which lasted on and off for much of the day and spent two hours birding along the road. We saw several Plate-billed Mountain Toucans and a superb Ocellated Tapaculo was coaxed into view in dense undergrowth (best views ever for me) but no Tanager Finch. We continued the short distance to the lodge at Bellavista where Gabo enquired of recent sightings while we checked out the humming bird feeders. Nothing of interest had been reported so we walked a nearby trail for an hour seeing a Spillmann’s Tapaculo creeping around a composter. We headed back to the reservoir for another hour which produced a superb pair of Rufous-headed Pygmy-Tyrants and a poor view of a Western Hemispingus. Gabo knew another site for Tanager Finch which we tried, walking on to the rather rundown research station. This and a third visit to the original site was unsuccessful although I had a much better view of Western Hemispingus. We reluctantly left the Bellavista area a little after 14:00 stopping brifly in Tandayapa. Between Tandayapa and Alambi Gabo heard a Zeledon’s Antbird calling. We stopped and Mike taped it in, excellent. We stopped for 15 minutes at the hummingbird feeders at Alambi and 45 minutes at Calacali for a repeat of our first visit (Black-tailed Trainbearer but no White-tailed Shrike-Tyrant). We drove back through Quito, Gabo taking a short diversion to drop something off at his parent’s house, and arrived in Papallacta at 19:30. We drove through to the top of the town where Hosteria La Choza Don Wilson had rooms and served an excellent meal. It was noticeably colder at over 3,300m but Choza Don Wilson was warm and comfortable. 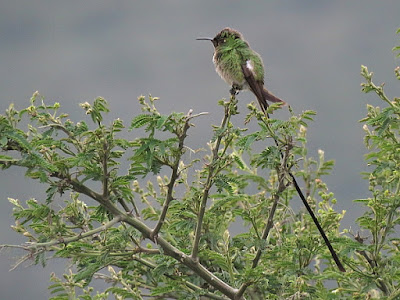 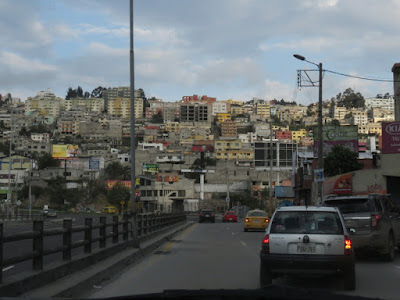 14 February. There was heavy overnight rain but it stopped before dawn. Breakfast wasn’t until 08:00 so we intended birding first and returning for it late morning. We left at 06:30 and drove up to the Thermas de Papallacta Spa Resort from where the road continued up into the National Park. Only problem was the gate was shut and the official manning it would not open it before 08:00. Just our luck to have a jobsworth on duty, or was it? We returned to the Don Wilson hoping we might get an early breakfast but no one was about. We birded the road outside to the river and returned to the National Park gate at 07:59. It was open and we continued for 1-2 kms to a junction in a large patch of solid forest. A good place for Agile Tit-Tyrant Gabo said and so it proved with one appearing after only a few minutes - new for us all. An excellent start and our delayed entrance no longer seemed important. We continued driving slowly, the forest patches becoming less continuous, and after 2-3 kms encountered a roadside bird flock with Black-chested and Masked Mountain Tanagers (the later new for Nick and me), Golden-crowned Tanager, Black-backed Bush Tanager and Rufous Wrens. While keeping tabs on the flock we heard a Crescent-faced Antpitta calling from a dense roadside gully. Gabo put his speaker in a gap just inside the forest and it soon came in, landing on a log in full view. Superb, but only for about 20 seconds as a motorbike, the only one passing us all morning, chose that moment to drive past and it flew off. Paramo Tapaculo was another target of mine and we heard several walking sections of the road but I always seemed to be in the wrong position to see them, although being blind as a bat at times like these wasn’t helping. I had more success with a Tawny Antpitta but it was bigger which helped! We returned for a late breakfast at 11:30, checked out and then returned to the National Park for another four hours. We refound the tanager flock although I didn’t get onto Masked this time. More Paramo Tapaculo frustrations ensued but I did have a good, if brief, view of a Rufous Antpitta. We tried higher up, driving a couple of kms past the chain barrier which was unlocked for us. Here were three Rufous-rumped Bush-Tyrants and in isolated bushes I finally had a decent view of a Paramo Tapaculo. It had been an unexpectedly brilliant day, the only disappointment being not being sharp enough to see a Crowned Chat-Tyrant that promptly disappeared. We left Papallacta just before 17:00 and drove to Baeza arriving at Kopal Lodge and Pizzeria at 18:30 just before dark. We had a nice room and an excellent pizza even if it did take a long time to prepare. 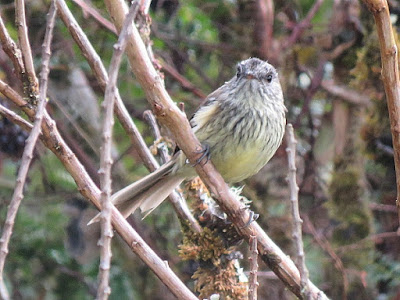 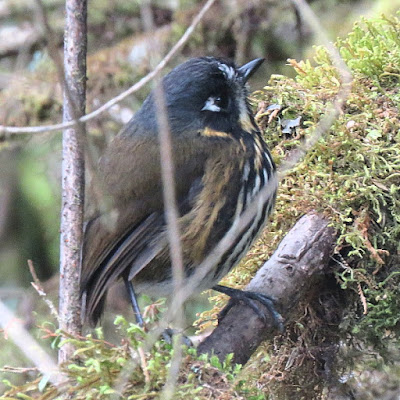 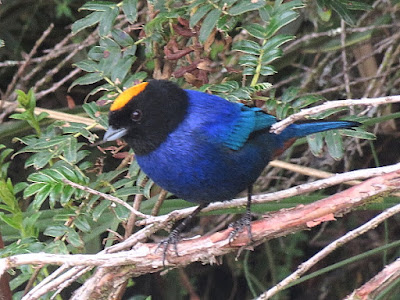 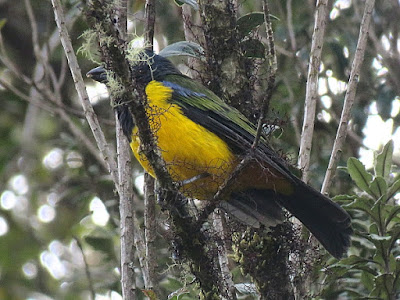 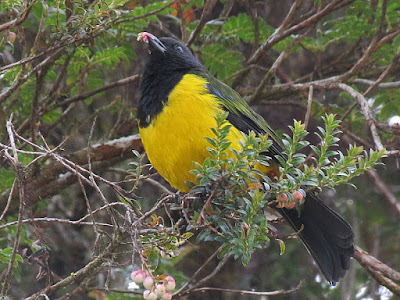 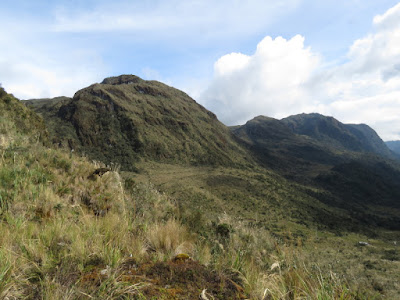 Posted by richard fairbank at 17:06