This blog is the third of five recounting a very successful trip to Northern Ecuador with Nick Preston, Mike Catsis and Gabo Bucheli who brilliantly guided us around for almost three weeks. It is illustrated with photos taken with a Canon Powershot SX60 bridge camera, many in the forest taken at maximum ISO and slow shutter speed. We had had some great days at Mashpi, Rio Silanche, Paz de Aves, Bellavista and Papallacta and arrived in Baeza the previous evening.

15 February. We left Baeza at 06:10 and drove to Cabanas San Isidro arriving in light ran at 06:45. Foremost on our minds was Peruvian Antpitta which Dave Cooper had photographed in November a short way down the Cock-of-the-Rock trail. We had also met a birder at Mashpi Amagusa who had photographed a pair carrying nesting material a little further down the same trail a week or so earlier. Spurred on by this recent sighting we set off down the trail in little more than half light and almost immediately a Mountain Tapir crossed the trail ahead of us. Unfortunately Mike and I were unsighted, by umbrellas. A bad dip, or it would have been if the tapir hadn’t done a quick U turn and approached us for a quick sniff before heading off. Magical. We continued to the antpitta area and arrived at 07:00. We stayed in the area until 15:00 but no success at all. Very few birds (Chestnut-capped Brush Finch best) and lots of biting insects made it a particularly unpleasant eight hours. The others returned to the lodge at one stage and saw a few things there but were soon back. At 15:00 we decided to call it a day and headed back to the lodge for a short session at the feeders where I caught up with Chestnut-breasted Coronet, Bronzy Inca and Long-tailed Sylph that the others had seen earlier. We returned to the car and started driving the road past the lodge but almost immediately encountered a friend of Gabo’s with a group who had just returned from Guacamayos Ridge. They had heard White-capped Tanager and Black-billed Mountain Toucan which were both targets for me and after a brief discussion we decided to give it a go. Not unexpectedly we had no luck with those species but Greater Scythebill, Ash-coloured Tapaculo, Green and Black Fruiteater and Plushcap made the visit worthwhile. We returned to San Isidro and birded the road just past the lodge for half an hour hearing a fairly close Wattled Guan and seeing Rufous-headed Pygmy Tyrant and, as the light faded, a superb Rufous-banded Owl. We returned to the lodge car park and found a San Isidro Owl near the lights of the entrance road. The first eight hours of the day might have been pretty grim but the last four were excellent. We returned to Baeza seeing a possum run across the road in front of us. 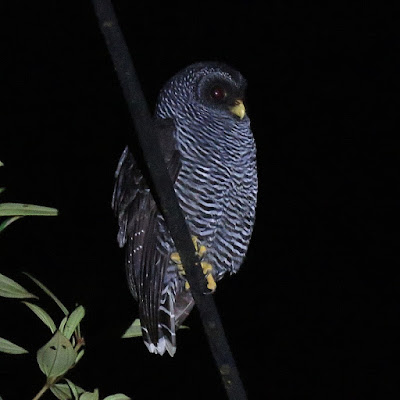 16 February. We left Baeza at 05:45 and went straight to the Peruvian Antpitta site. Two responded to playback as soon as we arrived but did not come in and soon moved away in different directions. The forest was still too dark to make it worth pursuing them although we birded the trail for almost an hour hoping one might appear. It didn’t. We then had to return to the lodge if we wanted to see White-bellied Antpitta being fed. We obviously did, Mike especially as it was a new bird. We assembled at the lodge, a little frustrated that the man with the worms was late – more time we could have been on the trail. We walked the short distance to the feeding area and the antpitta could be heard calling some distance away. An anxious wait ensued as the bird failed to come in or even move to whistled calls. It was made more anxious knowing it had not performed the previous morning but Gabo took over calling duties and after a few minutes we heard a different much close call and then it appeared, hopping into full view. Brilliant. We returned to the Peruvian Antpitta area and spent a couple of hours creeping around without sight or sound of them. We left and birded around the lodge and car park seeing little before driving the short distance to the Cimarron Trail. We spent 2-3 hours on the trail climbing up through good forest to an open meadow. I finally caught up with Black-billed Mountain Toucan, a pair seen towards the bottom and then near the top of the trail - I would have assumed they were different if one hadn’t had a large growth on the side of its neck. We also saw Slaty-crowned Antpitta and a brief Blackish Tapaculo while a pair of Black-breasted Fruiteaters proved very frustrating. I didn’t get onto the male at all and didn’t see the female well enough to eliminate Green and Black which was also present. We returned to the lodge for a balcony session before another try for Peruvian Antpitta. We were in the area from 15:00-18:00 but nothing. Four hours today not seeing Peruvian Antpitta to add to yesterday’s eight but at least our time not looking for it had been productive. We returned to Baeza where Gabo met his friend and top local bird guide Marcelo Quipo Quipo. Marcelo knew two antpitta territories on Guacamayos Ridge and had agreed to take us the next day. After our lack of success at San Isidro this seemed far and away our best chance. We arranged to pick up Marcelo at 05:30 the following morning. 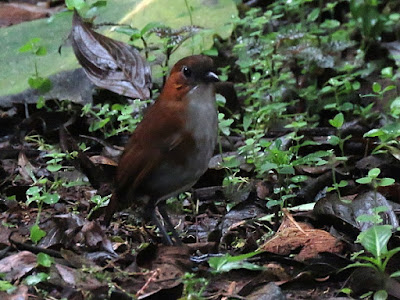 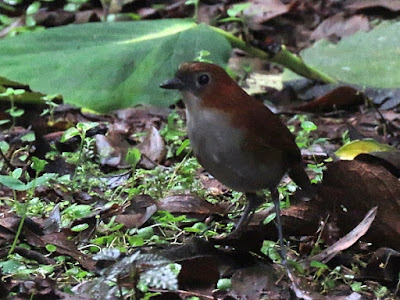 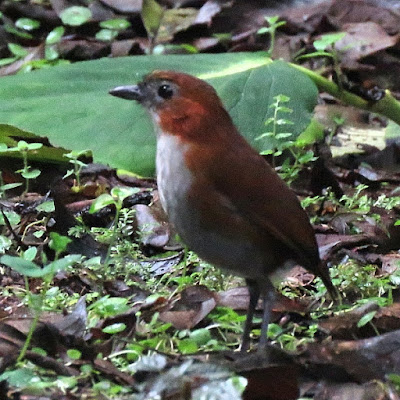 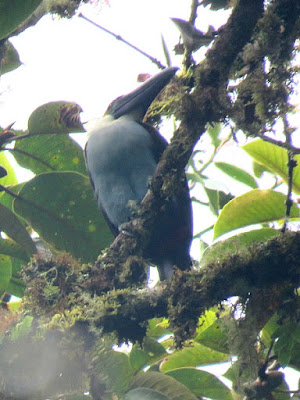 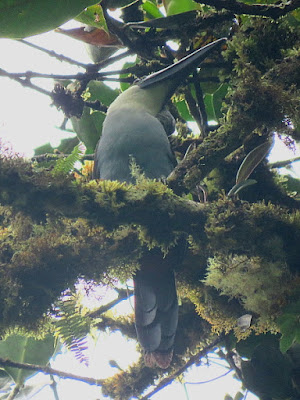 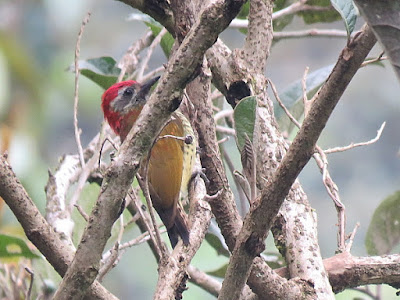 17 February. We picked up Marcelo and parked the car at Guacamayos Ridge at 06:00.  We slowly walked 3.5 kms down the trail seeing Black-breasted Fruiteater (I missed the male again, more than once), Long-tailed Tapaculo, Olivaceous Piha and Bicoloured Antvireo before reaching the first antpitta site. Nothing there but shortly after and much to our relief Marcelo pointed out a roosting Andean Potoo on its favoured branch. How Marcelo ever found it in the first place I’ve no idea as there were only a couple of places on the trail where it was visible and then one had to look through a particular ‘window’ to see it. We approached the second antpitta site with a degree of apprehension – we’d seen some brilliant birds already – it was worth it for the potoo alone but it was our top target. Another blank although Andean Cock-of-the-Rock, Andean Motmot and Golden-headed Quetzal in quick succession added to the day’s excellence. We headed back up to Marcelo’s first site and were trying to see a Chestnut-breasted Wren that only gave fleeting views when an antpitta responded to playback. I had an eye-level silhouette view on a horizontal branch until it hopped in front of trunk. Wow. Fortunately it gave several other views and I even managed some half-decent (or at least identifiable) photos. What a day! We tried again for the wren (just flight views for me) and again I missed male Black-chested Fruiteater on the walk back. We returned to the car at 14:00 and drove further along the road to a couple of more open areas on the far side of the ridge hoping for Pale-footed Swallow. Nothing, but any thoughts we had used up all our luck were proved false when we tried the Vinilles Road on the way back to Baeza. Here near the end of the 4-5 km track in an area of open pasture Marcelo spotted a Semi-collared Hawk in the top of one of the many isolated mossy covered trees. It gave good scope views but all too soon flew off. That really was it. We returned to Baez and dropped Marcelo off, he had been brilliant, and returned to Kopal to settle up but no-one was around. We visited another lodge (with White-tailed Hillstar on its feeder) to book rooms for our final night in Ecuador but they were full. Baeza is very popular with American kayakers. We returned to San Isidro and watched from the observation roof, hearing distant Wattled Guans but none were seen. Back in Baeza we settled up at the Kopal and Gabo booked accommodation for our return in the restaurant across the road. We had several really good days on the trip but this one was probably the best of them all. 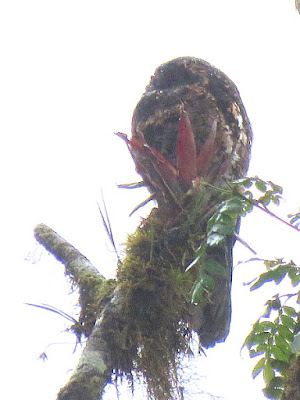 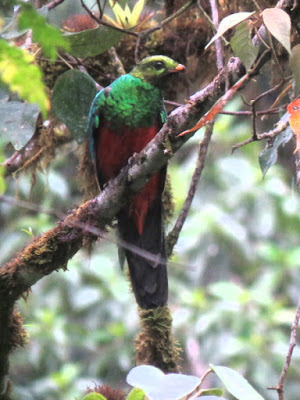 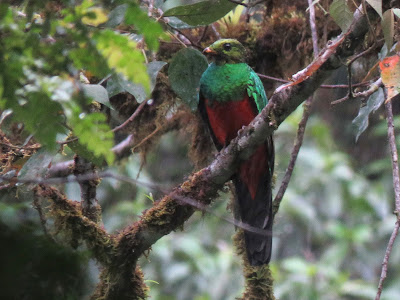 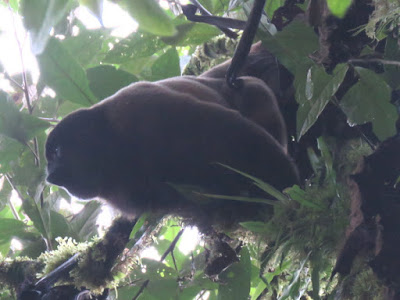 18 February. The Rufescent Screech Owl was calling predawn but had stopped by the time I had realised it and headed outside it. Annoyingly I did not have a recording and so couldn’t try playback and spotlighting the nearby trees was unsuccessful, not that I was sure in which direction it had been calling from anyway. We left Baeza after 06:30 and drove to the Bermejo Road and followed it beside the river up a valley for a few kms. We stopped a few times on the way up and walked sections of the road without seeing a great deal. There were plenty of Inca Jays and it seemed an ideal place for seeing White-capped Tanager, just not today. Mike needed to visit a chemist so he and Gabo returned to Baeza while Nick and I slowly walked back down the road. We saw Andean Motmot, Golden-headed Quetzal and I had a brief flight view of a dark guan I thought might have been Wattled but otherwise it was rather quiet. We were nearing the main road when Gabo and Mike returned, great timing! We continued past the San Isidro turning and stopped just outside Cosanga to check the river from the bridge. This time we saw a Torrent Duck. We continued to the open areas previously visited below Guacamayos Ridge and saw a smart male Chestnut-breasted Chlorophonia and heard Black-billed Mountain Toucan before a brief but heavy shower had us running for the car. We briefly stopped lower down to check unsuccessfully for a Blackish Nightjar which used to roost on an embankment but had better fortune with a Cliff Flycatcher. We continued dropping down to the Coca junction where we turned left before stopping at Cabanas Hollin. Here we had a session at their feeders seeing Many-spotted Hummingbird and Black-throated Brilliant (both new for me) and more very smart White-tailed Hillstars. There was a nice waterfall in the grounds and they served excellent very cheap food, although my insides were still unsettled and I just had soup. It would have been an idyllic spot were it not for the road noise from lorries breaking as they approached a hairpin bend outside. We heard Wing-banded Wren across the road but it wasn’t responsive and soon stopped calling. We continued to Wild Sumaco stopping first at the Worker’s House feeders. Here we saw Napo Sabrewing, Gould’s Jewelfront and Wire-crested Thorntail as well as Yellow-breasted Antwren. We continued to the lodge which was very impressive, but well outside our price range, and had more feeders. We met its effervescent co-owner Jonas Nilsson who gave us helpful tips as to where best to look for our targets although several were accompanied by a ‘we’d be lucky’ sort of shake of the head. We dragged ourselves away but would return and pay a daily fee for using its trails and facilities. We drove 2-3km further to the small village of Pacto Sumaco to find our ‘budget’ accommodation. After a false start or two we were directed out of the village to an isolated building in a small clearing on a hill. It was very basic (no electricity, outside toilets) but the rooms were OK and as evening fell the clouds dispersed revealing a view across to Volcan Sumaco. We returned to the village for a decent meal. 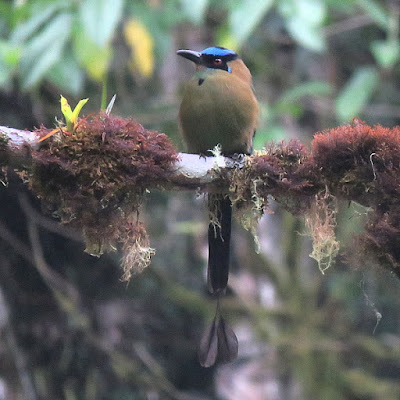 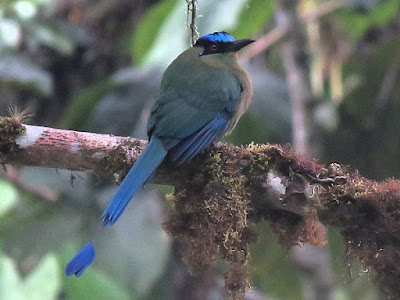 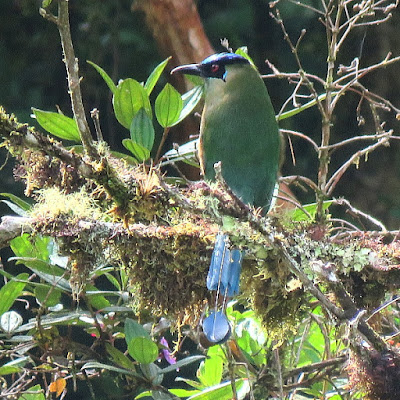 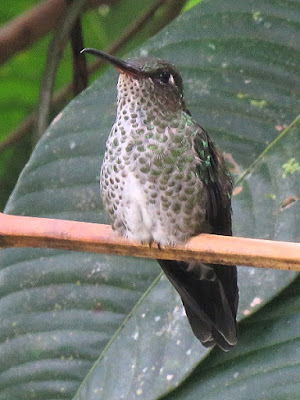 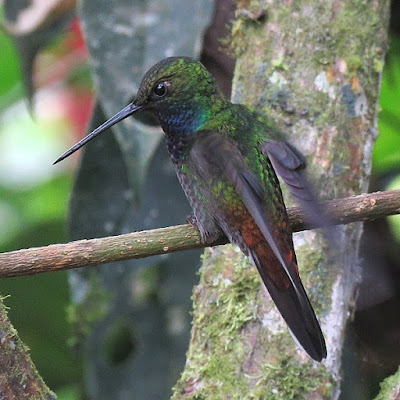 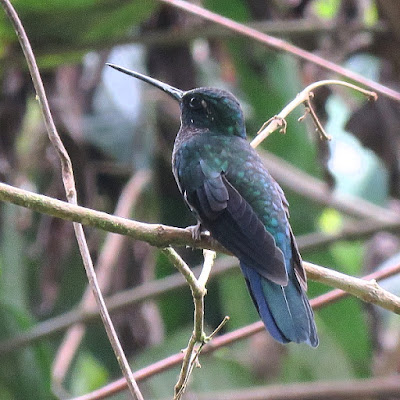 Posted by richard fairbank at 20:19