Caspian Gulls in the Cuckmere (13 December)

Saturday 14 December. Megan and I took Cookie to the Burgh after visiting Boxgrove Priory Cemetary. Little was showing in the strong wind and we did a short circuit seeing 9 Grey Partridges, 35 Stock Doves and single Red Kite, Buzzard and Redwing. Half was round Cookie became nervous of distant shooting and had to be dragged out of a bush, our return to the car was then faster than normal. The afternoon was spent sorting out 300 gull imges from yesterday ...

Friday 13 December. To get away from the worst election result I can remember and in the hope that a forecast of strong winds and a high tide would be good for gulls I took Cookie to the Lower Cuckmere where we spent four hours. I estimated almost 4000 large gulls were present in three close but distinct groups opposite Harry's Bush, probably the largest number I have seen there. Bright sunshine made it harder for me to pick out anything interesting due to its effect on shades of grey. Many birds were sitting down due to the strong wind which was also unhelpful while not being able to find a sheltered viewpoint made scope shake an issue and a couple of times I was almost blown over. Cookie was largely unaffected being below knee level. Most numerous were Great Black-backed Gulls with at least 2800 including an unread green colour-ringed bird most likely from Normandie.There were 650+ Herring Gulls of which I was happy 8 were argentatus, many others may have been too, and at least 350 Lesser Black-backed Gulls. Almost the first, closest Lesser Black-back I looked at had a blue colour-ring, most likely from Belgium, but it flew before I could read it and was not seen again. I saw eight or nine Yellow-legged Gulls, single first and second winters, two third-winters and four or probably five adults. Also several sleeping gulls with pure white heads and appearing darker mantled than Herring might have been Yellow-legged although quite a few Herrings had developed pure white heads too, as if they weren't hard enough as it was. It was Caspian Gulls I was particularly hoping to see having only convinced myself of a first-winter in four recent(ish) visits. During the time I was present I had three sightings of an adult Caspian Gull and two of first-winters. The first winters looked different at the time and reviewing images later confirmed this and also suggested that at least two of the adults were different, a very satisfactory outcome. I looked at the geese in the Cuckmere including walking up towards Chyngton Farm but only found single Brent and Barnacle amongst the Canada Geese. A Sparrowhawk flew over twice and heard then saw a Raven. The following photos are shown in the order that they were taken. There was little movement to and from the gull flocks and while those there didn't spook very often and some appeared to hardly move others did making it hard to keep tabs on them and work out how many of the scarcer species were actually seen. 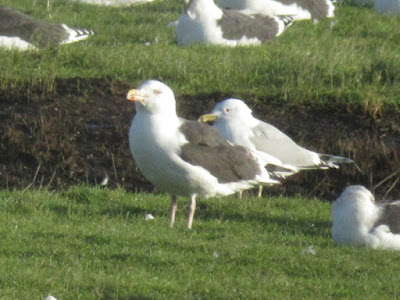 Thursday 12 December. Voting, what a disaster for the environment that turned out to be.

Posted by richard fairbank at 19:07