Tuesday 10 December. A visit to Shoreham Fort with Cookie just before high tide produced a roosting Purple Sandpiper, 7 Turnstones and a Greenfinch. We stopped at the Adur Saltings on the way home but the high tide at 5.9m wasn't enough to push the waders out of the saltings. I only saw 2 Dunlin and 7 Redshank although a colour-ringed Black-headed Gull made the stop worthwhile as it was the bird seen on Sunday. This time I could see the whole ring and despite the strong wind making it impossible to keep my telescope still managed to read it and obtain confirmatory images. The 'missing' character was a T making it TUXR, the second Polish ringed Black-headed Gull I'd seen on the Adur this month. Late afternoon I took Cookie down to the Adur for the dusk low tide. About 2500 gulls were present, probably helped by the strong SW wind. They were packed in close together on the exposed sandbar hiding most of their legs although the combination of wind and poor light would have made reading any rings impossible. Very approximately there were about 500 Commons and a thousand each of Herring and Black-headed, with more of the latter flying in from the north as I left. Amongst them were single figures of Great and Lesser Black-backed Gulls and a smallish (female?) adult Yellow-legged Gull while another larger white-headed gull probably was too. A Kingfisher flew under the Old Toll Bridge as we were crossing it. 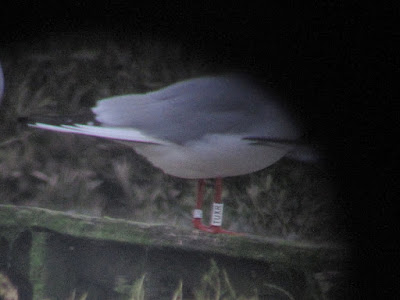 its appearance on the Adur were the first sightings since it was ringed as an adult in June 2016 at Zbiornik Przykona, Radyczyny, Turek, 60km NW of Lodz 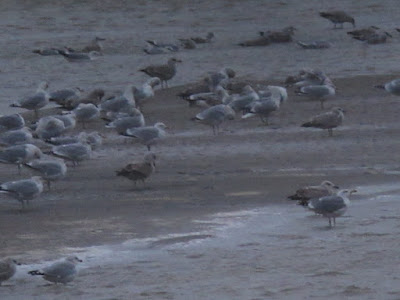 Monday 09 December. Another visit to Worthing with Megan in the morning and in the late afternoon I took Cookie down to the Adur. Despite a decent low tide there were very few gulls or waders present . Either something had spooked them before I arrived, although there was no evidence of bait-diggers, or they preferred elsewhere in the light winds. 12 Sky Larks on the riverbank were unexpected.

Sunday 08 December. Megan and I took Cookie up to Mill Hill. For the second trip running no thrushes at all were seen, also no pigeons and only one Robin with a Kestrel the only other notebook entry, and that a pretty desperate one. I took Cookie to the Adur for low tide. Over 1000 gulls were present between A27 and the railway bridge. They included a white colour-ringed Black-headed Gull standing on the edge of the water with only characters UXR visible. Three Herring Gulls were ringed, local A6XY (more details my recent Yellow Ring Day posting, here, although it was a white ring) and two from North Thames - red N5MT and another I couldn't be sure of. An adult Mediterranean Gull was also present while Grey Wagtail and Rock Pipit flew over.
Saturday 07 December. Megan went up to London so after dropping here at the station I took Cookie to Shoreham Fort (6 Turnstones and a Rock Pipit) and Widewater (3 Meadow Pipits). Later, at low tide, we visited the Adur seeing 10 Oystercatchers, 10 Lapwing, 2 Grey Plover, 12 Redshank and a second-winter Yellow-legged Gull. The latter was flushed by a bait digger before I could digiscope it.
Friday 06 December. Dreadful weather, Megan and I took Cookie to Buckingham Park where a Coal Tit was a pleasant surprise.

Thursday 05 December. I took Cookie to Goring Gap after dropping Megan in Worthing. The tide was out with no gulls in the fields. A few waders included 20 Oystercatchers, 10 Ringed Plover, 8 Grey Plover, 10 Turnstone, 14 Sanderling, 5 Dunlin and 8 Redshank.

Posted by richard fairbank at 12:37