Thursday 13th May 1982:  Kathmandu to Megauli, Nepal
Tanya and I left the Tourist Cottage at 05:45 and fortunately we were able to get her a seat next to mine on the bus as it wasn’t very full.  It was a comfortable journey, leaving at 06:15, and we made good time despite touring Kathmandu for half an hour for prospective passengers.  We arrived at Narayangath at 10:30 and walked to the other side of town for the Megauli bus which didn’t leave until 12:30, arriving a good four hours later.  This bus was very uncomfortable but only cost 5 rupees.  Hemlel, who most of our friends seem to have met and had reservations about, was on the bus so we felt constrained to stay with him.  It was an easy option at the time.  We dumped our gear in his parent’s house and waded across the river, spending the last hour of light in the grassland near the forest edge where two Large Grass Warblers were the highlight.  A big storm was brewing, with distant lightning.  It was not as hot as I was expecting but I still didn’t sleep very well - very uncomfortable in Hemlel’s attic.

Friday 14th May 1982:  Chitwan, Nepal
Up at 04:40 and after a short wait Tanya and I left to enter the park.  Heavy rain was just starting as we left and we were soon drenched despite my umbrella.  The river crossing was not much fun either as the water was much colder than the previous afternoon.  After an hour we entered the park (50 rupees entrance fee each) and after another river crossing during a violent squall, when my umbrella was blown about so much that several spokes bent, we found shelter in a small village.  The rain seemed to ease off so we continued to Tiger Tops, arriving shivering like a pair of drowned rats.  The lady in charge took pity on us with a free cup of tea.  The weather started to improve so we continued into the forest and fortunately the rain soon stopped.  A dry riverbed on the map had turned into quite a torrent and I had a few anxious moments while giving Tanya a piggy-back across.  Shortly after this I heard an Indian Pitta calling and we were quickly rewarded with excellent views of it on a fairly open singing perch just off the track (if all Pittas were so easy).  Tanya seemed to be quite impressed.  We continued walking, past the second checkpost to the main river where Tanya decided to cross to a village on the other side.  I returned into the forest, losing my notebook for a short time in the process.  I also discovered that water had got into my watch and later it stopped working.  I saw five more Indian Pittas and when a pitta hopped away ahead of me down a shallow ravine thought I’d another.  I was pleasantly surprised to see it was a Hooded.  Tanya was late at our rendezvous but appeared when I went back to look for her, having had to wait for a boat back across the river.  We slowly walked out of Chitwan and were back at Hemlel’s just before dusk.  Tanya was understandably upset to discover that a pack of playing cards was missing from her bag.  My bag contained nothing worth taking - I’d hardly brought anything with me as I was going straight back to Kathmandu but Tanya was going on to Pokhara and had more with her.  I’d seen just under 100 species today and have seen all of Nepal’s pittas (with Blue-naped at Godaveri in December 1979).  Another bad night’s sleep in Hemlel’s attic, the missing cards putting a slight downer on proceedings although nothing was going to displace my delight at having seen Indian Pitta! 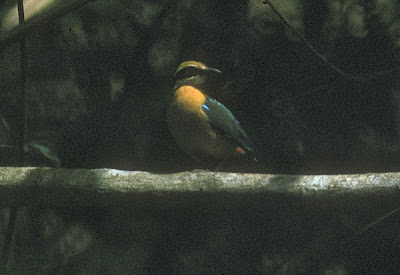 Saturday 15th May 1982:  Meghauli to Kathmandu, Nepal
We were up early, probably before 05:00 but my watch was not working - not having recovered from yesterday’s soaking.  The bus appeared to be ready to leave when we got to Meghauli at 05:30 and it left at 05:45, arriving at Naryangath soon after 08:00.  We walked across town to the bus park just in time to board the bus.  Tanya got off at Mugling to continue on to Pokhara, a nice girl.  I was back in soon after 13:00.  I went to the Blue Mountain Lodge to find I’d just missed the others so I couldn’t get at my rucksack.  They’d gone to Gokana for the afternoon/evening but rather than try to catch up with them I ended up eating on Freak Street until 16:45 then returned to the Tourist Cottage (room 12 again).  I was carrying what little I’d taken to Chitwan in a karimat stuff sack.  The outline of my water bottle must have looked like a bottle of whisky as three times I was asked if I wanted to sell it, one potential purchaser was so insistent that I had to show it to him!  I was note writing and reading in my room for the rest of the day.  I’d got a blister on one toe and my right shoe is on its last legs – they’d done pretty well to survive this long but it presented something of a problem with Langtang imminent.  I had an early night.

Posted by richard fairbank at 17:38