Monday 1st March 1982:  Bangkok to Kathmandu, Nepal
Combining sitting in a chair and leaning on my rucksack so it didn’t go for a walk was not conducive to a good night’s sleep and I woke every half hour or so.  We checked in at 06:30 and the flight, a very nice Thai A300 (Srimuaig) left soon after 08:00.  We landed in Calcutta for three-quarters of an hour, where most passengers seemed to disembark, and the plane continued virtually empty to Kathmandu.  Passed through visa and customs with no problems and got a taxi for 20 rupees to City Lodge which had been renamed Tourist Cottage Lodge.  A room for three was 9 rupees each per night.  We took passports to Immigration and the cost of trekking permits left us with little money, although I had enough for a few pies in Stylist Pie Shop.  I called in at the Post Office on the way and collected a letter from home.  Went to KC’s for a meal and Richard Grimmett appeared half-way through which was a very pleasant surprise.  A good night’s sleep – helped I’m sure by being in more temperate climes.

Tuesday 2nd March 1982:  Godaveri and Kathmandu,
Colin and I got the 07:45 bus from opposite the Post Office to Godaveri for 1.5 rupees.  We arrived there by 08:30 and birding there was excellent until 13:00 when activity died.  We got a bus back to Kathmandu after a 30 minute wait and returned to Immigration where we met Dave and got our passports back.  The first bank I tried didn’t like my brand of traveller’s cheques but told me of another nearby which did.  I changed £60 there with no trouble.  By then it was too late to visit Post Office but Dave had posted most of my cards for me.  I bought some iodine and a couple of books to read.  In the evening KC’s was full so we ate in Jamaly’s.  Returned to lodge to find my laundry had been done and spent rest of evening sorting out what to take trekking and what to leave in store. 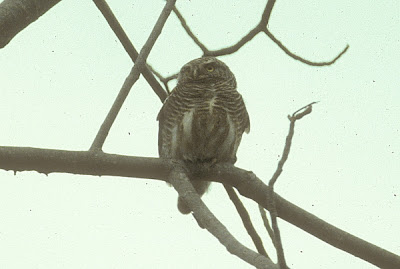 Up at 06:00 to finish packing and at bus station by 06:40 for the 07:00 bus to Pokhara (29 rupees).  The bus was late, had trouble starting, and then once underway soon had to stop to pump up tires.  It broke down just outside Kathmandu and took three hours to repair.  The bus became very crowded after Mugling.  Some good views from the bus at times, although I was on the wrong (left) side for most of them.  It was quite cloudy towards Pokhara where we arrived at 18:15 (nearly 5 hours late) just as it was getting dark.  Lots of touts joined bus at  trying to persuade us to stay at their hotel.  The bus dropped us in the centre of town and we were taken to one hotel but the offered price of 20 rupees had increased to 25 when we got there.  It didn’t take long to find another hotel nearby where 20 rupees meant 20.
﻿﻿﻿﻿
Birds seen:  Cattle Egret 6, Little Egret 1, Black Kite 2, Egyptian Vulture 6, Steppe Eagle 4, Red-thighed Falconet 1, Kestrel 1, Red-wattled Lapwing 1, Barred Owlet 1, White-breasted Kingfisher 2, Indian Roller 20, Brown-throated Sand Martin 50, Swallow 50, Red-rumped Swallow 2, Nepal House Martin 2, White Wagtail 10, Red-vented Bulbul 10, Magpie Robin 10, Little Forktail 2, Brown Shrike 5, Long-tailed Shrike 8, Black Drongo 25, Rufous Treepie 4, Indian House Crow 30, House Sparrow 10.